Wherever one finds themselves in Colorado on the 4th of July there’s a nearby celebration eager to welcome residents and travelers. Below is a list of 35 communities with planned events, by no means is this a complete list, there are many more. Be aware that  fireworks may be cancelled in areas where the fire danger is extreme.

Pueblo – Rollin’ on the Riverfront July 4 with the Pueblo Symphony.

Westcliffe – Parade, flea market, car and motorcycle show – fireworks have been canceled due to fire danger.

Happy and Safe July 4th to all.

“Affairs of the Heart” Tours 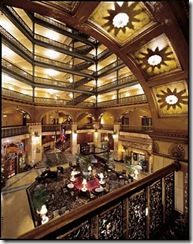 Historic tours of Denver’s venerable Brown Palace Hotel focus on “Affairs of the Heart” during February. Oh, the tales Debra Faulkner, hotel historian and archivist, has to tell. After 118 years the “Brown” reveals stories of intrigue, romance, love triangles and even murder. Public tours are offered every Wednesday and Saturday at 3pm and last approximately 75 minutes. Tours cost $10/person, reservations are required. Children must be 10 years of age.

Besides “Affairs of the Heart” and general history tours, specialized  themes include a presidential tour (Every U.S. president  since Teddy Roosevelt in 1905, with the exception of Calvin Coolidge, has visited The Brown Palace.), an architectural tour and the ever-popular ghost tour given in throughout October. Groups of 5 or more must make arrangements for a private tour. Private tours can be arranged for those requiring a time outside of the normal scheduled tours.

I suggest making reservations for Afternoon Tea before your tour. Served in the eight-story atrium lobby the traditional afternoon ritual includes tea sandwiches, scones with Devonshire cream shipped directly from England and tea pastries. All accompanied by a harpist or pianist. If your valentine is a chocoholic the Chocolate Decadence Tea is sure to be loved – and, you for the idea.

You may have recycled the tree, put away the presents, and eaten the leftovers but have you dealt with the dreaded fruitcake from Aunt Mabel? If not, this is your opportunity. Head to Manitou Springs, January 9th and have fun disposing of the fruity, nutty "treat."

Tucked between Pikes Peak and the Garden of the Gods, Manitou is immediately west of Colorado Springs. The visitor’s bureau calls the town "magical", I call it quirky. You’ll find characters and class – and, a whole lot of panache. This is a town that knows how to have fun and take a lighthearted look at life.

How better to cap off the holiday festivities that to join in the hurling and launching at the 15th Annual Great Fruitcake Toss? Competitors and spectators will gather at the Manitou Springs High School Track for a final holiday “send off”. Bring your own cake in one-, two-, or four-pound sizes or "rent" one for $1.00.  Fruitcakes must contain glaceed fruits, nuts and flour – they cannot contain anything inedible. Don’t wrap in foil, duct tape, etc., all fruitcakes must be visible to the "Fruitcake Toss Tech Inspectors."

Events start with the Kids Toss – three age groupings, boy and girl winners, and the Fruitcake Toss – one person physically throwing a 1 pound cake. Then, they get down to the serious stuff: the Fruitcake Launch using a mechanical device and the Pneumatic Spud Gun or canon division using pneumatic devices brought to the competition by the contestant. It doesn’t stop there, they also have the team “Catch the Fruitcake” competition, and Accuracy with targets place on the field of "battle". The entertained crowd gets to vote for the Most Creative Launch and the Best Showmanship. Teams are asked to "dress" for the event.

Bob almost wept the first time he saw all the flying fruitcakes crushing to earth. This is a man who never saw a fruitcake he didn’t like. Imagine how happy the squirrels are to clean up after the event. After the competitions we "squirrel" away for a delicious healthy lunch at Adams Mountain Cafe.

When You Go: The Great Fruitcake Toss runs from 10am – 2pm, Saturday, January 9, 2010 with registration beginning at 9am. Entry Fee is one canned food item or one non-perishable food item to be donated to the local food bank. 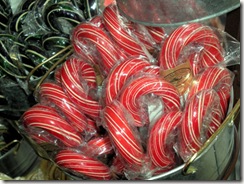 Along with thousands of others we stopped by Hammonds Candy Factory for the 9th annual Candy Cane Festival today. After a week of extremely cold temps, grey skies and snow everyone was ready to bask in the pleasantly warm sunny day, visit with Santa and stock up on holiday sweets.

Of course, there was a full array of Hammond candies for sale. Buckets of the hand-formed candy canes in a rainbow of colors and flavors, baskets of old-fashioned ribbon candy, giant lollipops and peppermint pillows tempted shoppers. Bags of candy coal reminded us of those who were more naughty than nice this year.

Although the 2009 Candy Cane Festival is over one can always stop by the factory for a free tour or visit the retail store Monday – Saturday.

View the slide show for more photos of the 2009 Candy Cane Festival. A sweet time was had by all.

The delight of a child- toddler to teen – Santa’s lap is sure to boost your holiday spirits.

After your visit to Hammond’s I bet you won’t be able to wait till Christmas for your first sweet treat.

I’m adding a new feature on Where To Go – Travel USA. Throughout the summer I plan to post a few special events, festivals or happenings around the state of Colorado for the upcoming weekend.

Memorial Day Weekend kicks off with events all around the state – art, sports, outdoor recreation, history and beer gain attention this weekend. Get out and have some fun. 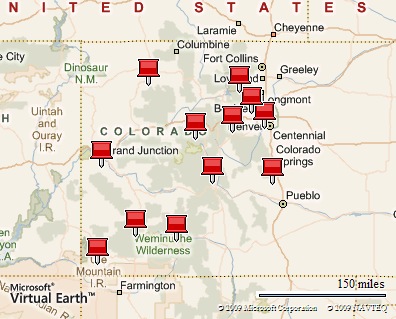 END_OF_DOCUMENT_TOKEN_TO_BE_REPLACED

Where To Go – Travel USA
Blog at WordPress.com.