Thankful for the Mayflower Pilgrims 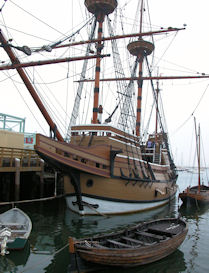 When I was nine years old another child asked me what Thanksgiving reminded me of, my reply was, “Pilgrims.” Harriett May’s response was, “No, turkey, you big dumb elephant.” The phrase, “Big dumb elephant” has become an inside family moniker.

Pilgrims remain an important link to Thanksgiving in my mind. Visiting the Mayflower replica Mayflower II and Plimoth Plantation in Plymouth, Massachusetts gave me a deeper understanding of  who these people were, what they left behind in Europe and their grit and determination in establishing a new life in North America.

There are those today who would rewrite history denying any acknowledgement of pilgrims in a positive light. Somewhere between that view and the simplistic version we learned in kindergarten I feel there’s much to admire in the accomplishments of the men and women who endured the journey and stepped foot in their new homeland. A land that nearly four centuries later is thankfully my homeland.

Stepping aboard the Mayflower replica my first amazement is the size, this is not a majestic ship. A high school quarterback could throw a football from stem to stern. As staff members answer questions and share details of the original ship and voyage we can barely imagine 102 passengers and a crew of about 30 in this space. They endured 66 days at sea. Storms became a major factor during the last half of the journey as did a broken main beam and navigation errors. After all, their intended destination was the Hudson River not Cape Cod, their first landing site.

Costumed role players assume the part of specific Mayflower passenger or crew member, sharing personal accounts of shipboard experiences. Descending to the ‘tween deck areas I’m again stunned at how little space each family had while on board, cramped doesn’t begin to describe conditions. The ship had no dining room, indeed not even passenger cooking area. Everyone was responsible for their own provisions, using small charcoal braziers for cooking. Imagine the cold, the damp, the darkness, the smells.

After finally harboring at Plymouth, Dec. 11, 1620 they decided the area was suitable for settlement. Pilgrims and crew lived on the ship through the harsh winter, it was their only protection from the elements. Malnutrition, exposure and illness took a heavy toll, nearly half of the crew and passengers died from scurvy, pneumonia or tuberculous.

Those who were able laid out home sites and a village street and began construction on individual homes. In late March survivors moved off the Mayflower  into their settlement. The ship soon embarked on her return voyage to England, which was completed in 31days.

Mayflower II is a re-creation of a late 16th-century English merchant ship approximately the same size of the original Mayflower. Built in England during the 1950s, Mayflower II crossed the Atlantic under sail with no motors or chase boats in 1957. Today it is docked at State Pier on the Plymouth, Massachusetts waterfront.

When You Go: Plymouth is located on Cape Cod Bay approximately 40 miles south of Boston. See Plimoth Plantation to plan your visit to Mayflower II. 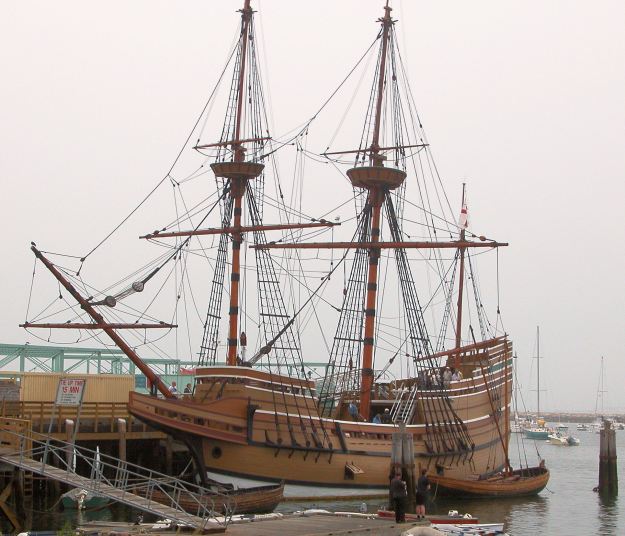 2 thoughts on “Thankful for the Mayflower Pilgrims”