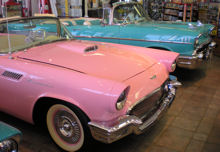 I’m not a truck stop aficionado but Russell’s Truck Stop four miles north of Springer, New Mexico merits a visit. Actually I believe the more correct term is Travel Center. A few days before our trip the March issue of New Mexico magazine arrived with a feature on Springer. An interior picture of Russell’s caught my eye and I vowed to stop on our way south. The magazine didn’t identify exactly where to find Russell’s, we went sailing by at 75 mph, had to go four miles to the next exit and head back north.

Russell’s most unique feature is the four 1950s convertibles on  display among the Subways, snack foods and souvenirs. The pristine paint jobs and shiny chrome takes me back to my teenage years. The Chevy Bel Air recalls dates at the drive-in movies and Steak ‘n Shake. 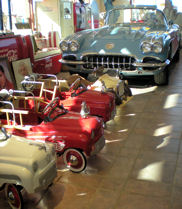 A clerk tells me that the owner of Russell’s started with just a couple of old cars but now has bout 35, mostly convertibles and mostly from the 50s. She says he’s building another truck stop on I-40 near the New Mexico / Texas border housing about two dozen of his collection. Almost as much fun as the convertibles is the row of peddle cars and firetrucks from the same era.

We’ve planned a late breakfast at Russell’s. The full-service restaurant, like everything else here is spotless. The breakfast quesadilla sounds interesting and we decide to split one. Wedged between two large flour tortillas are scrambled eggs, sausage (one could also choose bacon or ham), jack cheese, and green chile, grilled until crisp but not dry. Salsa, sour cream and a plate of hash browns accompanied the quesadilla. Very tasty and we’re both satisfied without being stuffed.

We note the clientele as almost an equal mix of local rangers solving the world’s problems over coffee, over-the-road drivers and travelers. After breakfast Bob browses the trucker supplies while I take pictures of rhinestone studded purses, and Coke and Betty Boop memorabilia. In addition to the restaurant there’s also a Subway deli and an ice cream counter all under the same roof. I’m impressed with the fresh flower bouquets in the Ladies restroom.

Tourists and truckers will find all the amenities they expect from a good travel center plus a bit of nostalgia at the I-25 exit 419 in Northern New Mexico. Don’t fly by, stop for a visit to Russell’s.