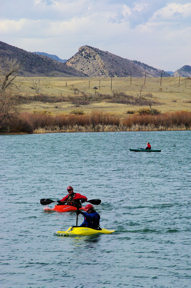 The first Saturday of spring 2009 with temps in the 70s- what other incentive do we need to get outside? A trip to Chatfield State Park  proved we weren’t the only ones wanting to be outdoors and active on such a day. Fishermen line the banks of streams and ponds, fathers wait patiently as offspring cast their lines. Kayakers paddle into headwinds, turn around and leisurely drift back to their starting point. Bicyclists, recreational and competitive, peddle along roadways, bike paths and dirt trails. A string of horseback riders set off from the stables for a trail ride. Trees show the merest promise of budding. We vow to come back in May when ancient cottonwoods shade the banks of Plum Creek.

We are surprised to see how many boats dot Chatfield Reservoir in March. Obviously these were boaters eager to get the season underway, not wanting to waste a day. We didn’t see any waterskiers or jet skis but it probably won’t be long before they’re out too. I did see a black lab enjoying a swim.

In an area set aside for dog training canines of every breed and their owners walk, run and train. Picnickers and campers arrive to relish the weather. 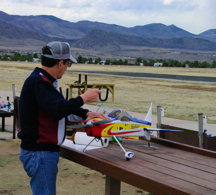 The model airfield is a unique feature at Chatfield. With wind gusts up to 33mph only one plane was in the air during our visit. However, seeing the many different designs, prop to helicopters, and watching the guys tweak their aircraft was almost as interesting as watching a flight. I’m sure it’s not a male only hobby but you wouldn’t know it by today’s “pilots”.

Plum Creek and the South Platte River flow into Chatfield Reservoir which was constructed in 1967 for flood control. The state park surrounds the reservoir with terrain varying from prairie to wetlands. More that 300 bird species, migratory and resident, have been identified, including double-crested cormorants, bald eagles, American white pelican and the elusive burrowing owl. A heronry provides nesting habitat for about 80 pairs of great blue herons. 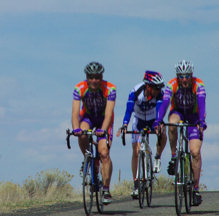 Today was a perfect day to wander along a pathway and listen to the swoosh of a paddle cutting into water, rhythm of a horse’s gait or the trill of an unseen bird.

When You Go: Chatfield State Park is open year round 5am – 10pm except for overnight campers. The main entrance is located one mile south of C-470 on Wadsworth. Check the website for a list of activities, fees and regulations.