Down Under and More

Curiosity about Colossal Cave Mountain Park propelled us to the longtime Tucson area attraction that’s on the National Register of Historic Places. We joined a cave tour with several family groups. As we waited kids stayed busy finding the Discovery Tour stations and collecting the different paper punches on their maps. Aft

er completing all 18 they receive a “Treasure” from one of the two gift shops.

Because Colossal is a dry cave the formations don’t have that moist sheen frequently seen on “cave bacon” or “draperies.” No beads of water gather on the stalactite  tips waiting to be the next drip.

Our guide was pleasant if not exactly animated. She shared human history at the cave as well as natural history. In the late 1800s the cave was a reputed bandit hangout. Imagine the wide-eyed expressions on the youngest tour members’ faces. Early in the 20th century a local dude rancher encouraged visitors to explore the cave and bring back a formation piece to prove they had been inside.

For a dramatic ecology lesson visit Colossal followed by a tour at Kartchner Caverns State Park. It’s a graphic demonstration of abusing an environment verses protection and preservation. There are two other caves in Colossal Cave Mountain Park that are carefu

lly protected and used for research.

I don’t regret visiting, however, it goes on the list of “Been There, Move On, Don’t Need to Go Again.” That list is much shorter for me than the “Want to Repeat” one. For those who had never before been in a cave seeing the underground world was a treat.

After our cave tour we drive to the La Posta Quemada Ranch section of the park – a working ranch for more than a century. We didn’t have time for a horseback ride but a ride in the Rincon Mountains along the National Mail Stagecoach Route would be very scenic. 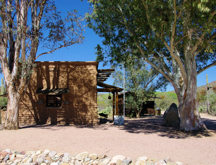 The Civilian Conservation Corps were largely responsible for development of Colossal Cave Mountain Park in the 1930s. The adobe CCC office building has been renovated, housing a museum recalling their efforts and the men who served. From developing the tour route through the cave to the limestone buildings and ramadas the CCC deserves great credit.

nt Hohokam Indian culture to modern cave research. I was most intrigued with the Analemmatic Sundial which I renamed the human sundial. The horizontal calendar grip is unlike any sundial I’ve ever seen. I tried to get Bob to stand still long enough to serve as the gnomon (vertical rod).

When You Go: Colossal Cave Mountain Park is open every day of the year. The park is located about 17 miles southeast of Tucson. Saguaro National Park – Rincon Mountain District lies north of Colossal Cave.  The basic cave tour lasts about 50 minutes covering a half-mile route with numerous stairs, temperature inside the cave is a consistent 70° – a pleasant relief in mid-summer. Reservations are not required, tours are not pre-scheduled; they promise you’ll never wait longer than 30 minutes after purchasing your ticket. There are also Ladder, Wild Cave and Candlelight Tours – these do require reservations. They also suggest reservations for the trail rides.