Yes, we did go to the Perfect Landing at Centennial Airport this week after my friend told me they added a prime rib dinner to their $10 Awesome Anniversary Specials. This week we went late after an art show reception; it’s a different feel with the lights of the city instead of the setting sun.

We both indulged with the prime rib, Bob ordered an end cut and even after 8pm they 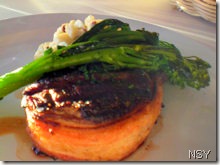 were able to fulfill that request. Plus, they were cooked exactly as ordered and served with au jus and a creamy horseradish sauce. The luscious creamy mashed potatoes and a mixture of fresh green and wax beans accompanied the meat.

We started with a grilled Caesar salad and right out of the oven crusty bread. To no one’s surprise we ended with a slice of key lime pie. Good, but not quite as tart this week. I like the tartness; that’s what makes it key lime in my mind.                    Perfect Landing – Filet Special         Salad and pie an additional $5/each.

On the piano, Boogie Bob’s selections are a bit mellower at 8pm than at 5:30pm.

When You Go: Check out an earlier blog for details on the $10 Awesome Anniversary Special running through May.