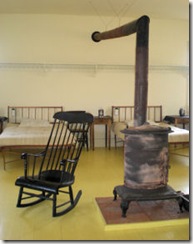 The year is 1868. Mail stages and wagon trains loaded with trade goods await military escort westward along the Santa Fe Trail. The tepees of a band of Cheyenne Indians stand just outside the fort expecting to receive their first rations as promised by the Medicine Lodge Treaty signed the previous year. A wounded 7th Cavalry soldier seeks warmth in a rocking chair near the stove in the post hospital. The place – Fort Larned in southwestern Kansas.

8 the Fort was an  important link along the Santa Fe Trail. Today nine of the original stone and timber buildings and the reconstructed Blockhouse echo with the history of the march to the American West. First established to protect traffic along the Santa Fe Trail, Fort Larned later served as an agency for the Indian Bureau and, after the Civil War, soldiers from he Fort protected Santa Fe Railroad construction.

Unfortunately, we didn’t arrive until late afternoon on our trek across Kansas and had less than an hour to explore Fort Larned. What we did see captured our interest and imagination. In the Visitor Center an informative receptionist set the stage for our visit. Her extensive knowledge and enthusiasm came through in each sentence. With our time limitations we skipped the orientation slide show and the museum deserved more attention than our quick walk through provided. We were eager to see some of the Fort’s refurbished buildings and snap a few photos.

We noted walls that talk with century-old graffiti – names and dates etched in the soft stone building blocks. Stepping into the Company C Third U.S. Infantry Barracks we’re surprise at the detail of the furnishings – fire buckets to coffee grinders, uniforms and firearms. Imagine the level of activity when this building housed and fed 150 men. The east half of the barracks replicates the post hospital, again in fascinating detail – more than we can observe during one visit.

The Shops Building recalls the multitude of tasks  undertaken at the Fort – bread baking in the brick oven, blacksmithing, carpentry, tinsmithing, saddlery. We’ll have to 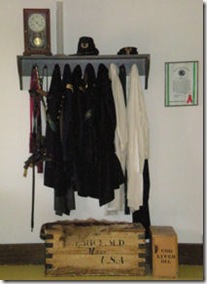 return to further explore the New and Old Commissaries, Blockhouse, Quartermaster Storehouse, two Company Officer’s Quarters, and Commanding Officer’s Quarters. We only scratched the surface of Fort Larned. And, we did not scratch our names in stone.

During the summer season staff and volunteers serve as living historians. Dressed in period clothing they share details of Fort live. Special weekend events further replicate the 1860s era. Saturday, Sunday and Monday of Memorial Day weekend as many as 70 re-enactors bring the Fort to life in the time of the Indian Wars. Other special events include:

When You Go: Fort Larned National Historic Site is open daily 8:30-4:30 year round except for Thanksgiving, Christmas Day and New Years Day. Admission is FREE. The Fort is located 6 miles west of Larned, Kansas just south of KS156. Great Bend, Kansas is 27 miles to the northeast, Hays 63 miles north and Wichita 130 miles southeast.

Also Visit The Santa Fe Trail Center – Museum and Library. The facility is located 2 miles west of Larned and 4 miles east of Fort Larned NHS. Indoor and outdoor exhibits interpret the importance of the Santa Fe Trail in the country’s push westward.