Two railroad relics rest in Cheyenne parks commemorating the importance railroads have played since Cheyenne’s founding. The massive Big Boy steam engine #4004 proudly stands in Holliday Park. The coal-fired Big Boy was designed to pull a 3600-ton train over the steep Union Pacific grads between Cheyenne and Ogden, Utah. Ranked as the world’s largest steam locomotive, Engine #4004 ran from 1941 – 1958 and is one of only eight remaining Big Boys on display in the United States.

Wyoming’s oldest locomotive is retired to Lions Park on the north end of Cheyenne Botanic Gardens. Nicknamed “Ol’ Sadie” by Union Pacific crews, #1242 was built in 1890 in New Jersey. The coal/steam powdered engine ran the Walcott-Saratoga-Encampment spur line until 1954.

While visiting “Ol’ Sadie” note the unique fence created by Floyd Young, the last engineer to operate the locomotive. In retirement Young collected Western and railroad relics, forming them into a fence around his home. After his death the family donated the fence to the Botanic Gardens to enclose Young’s beloved #1242. 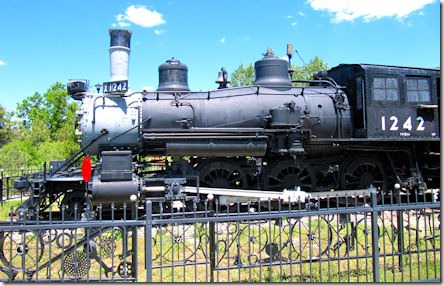