On this bright sunny Saturday between Christmas and New Years we decided on a drive and leisurely lunch. Castle Rock became the destination. Hearing Warren Byrne comment on his restaurant show about the Christmas decorations at Augustine Grill we decided to make a return visit. 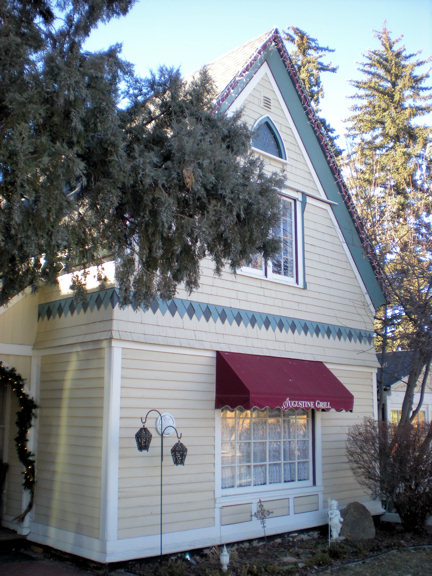 The Augustine Grill is located in a 1902 Victorian home near Castle Rock’s courthouse square. We were immediately seated in the Main Dining Room, a bright open space with lots of windows, a gas fireplace and Christmas tree reaching to the ceiling. The room was nearly filled at a little after 1:00 pm.

Perhaps that explains the slow response by any wait staff. It was at least 10 minutes before we were acknowledged and another ten before we received water and ice tea. At that point the waiter wanted to know if we needed a couple of more minutes. No way was I letting him get away for another extended period. I rather curtly said we were ready to order.

Bob was planning on the grilled salmon only to be informed it was the one item they were out of. He chose the quiche of the day – bacon, portabella mushroom and asiago cheese – served with a cup of soup and salad with peach vinaigrette dressing. He selected the soup of the day, a roasted vegetable in a cream base. My choice was the Cup & A Half, salad, cup of soup and 1/2 sandwich – either tuna melt or chicken salad. Lunch was served promptly, although the soups were on the wrong plates. Not a problem, since I stole a taste before switching bowls. Bob felt the quiche could have been warmer but otherwise was satisfied with the flavor, salad and pureed soup. My tomato basil soup was delicious and the salad and dressing tasty. I was disappointed with the chicken salad, billed as chunks of chicken, pineapple and pear in a light lemon yogurt dressing. I failed to find a single piece of pear and the dressing was basically tasteless. The half croissant it was served on was old and stale.

Currently watchful of our food intake we skipped dessert even though we know the Bourbon Pecan Pie to be delightful and the Butterscotch Bread Pudding always tempting.

Our young waiter was friendliest when it was time to present and collect the bill.

I like the ambiance of this restaurant, generally find their food above average and in the past have experienced good service. Today several somethings seemed amiss, there was much whispering among staff, management seemed absent as did bus and bartending staff. We’ll hope for better the next time around.